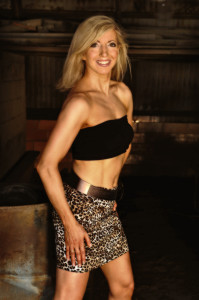 Photo by Amir Marandi Productions
A DESIGNER SCAR
I never imagined that I would become a cancer patient. After all I was young, healthy, and in the best shape of my life and was preparing to compete in the NPC Northern Kentucky Beverly International which was one of the largest amateur bodybuilding and fitness competitions in the US. I had just landed a dream job in advertising sales with lots of upside potential and I was at the prime of life or at least I thought so until a small lump changed everything. Unfortunately, according to statistics one in every eight females will end up with an unfortunate diagnosis because cancer does not discriminate and more young women are being affected. This is no longer an “older woman’s,” disease.

The fourth year medical students and interns were busy checking out the incision that was on the right side of my chest and under my arm from recent cancer surgery, while a team of radiation oncologists were busy writing on my chest and adding stickers with various symbols so I could receive radiation treatments for the next seven grueling weeks. I looked like I was in a tattoo parlor with all of the purple markings except for the fact that the numbers and writing didn’t look like anything artsy. I asked if I could still go to the gym and train and I was informed that would be ok as long as I didn’t overdo it. The medical students and interns recognized the fresh scar on my chest as being the works of the highly skilled breast surgeon Dr. Kathleen Erb. We even joked about the incision being a “designer’s scar,” because they recognized the doctor’s clean incision lines that clearly demonstrate the skill of combining both science and art.

I was training hard to compete in the figure division of bodybuilding and was part of a team of competitors called Body Armor. After the initial diagnosis I went nuts in the gym and trained harder than ever. I even attended the Arnold Expo in Columbus Ohio and competed in the USMC (men’s fitness challenge) just three weeks before my cancer surgery! Everyone thought I lost it because I was informed that life as I knew it was over. I refused to accept that and once I was through treatment and was healed – I stepped onto the stage for the first time and placed 5th at the NPC Mid – Atlantic Grand Prix! I also trained even harder than ever and made it to the NPC Northern KY Beverly International show and placed 5th and placed 4th in another show after. No one could believe that I was a cancer survivor and still technically a cancer patient. I even joked about having a, “designer scar,” on my chest to the other competitors.

I would love to do some fitness modeling and use my own
experience to motivate, inspire, and encourage others that have suffered from
cancer or any devastating illnesses, or have family or friends who are going
through it. People today are looking for positive motivation and I’m about
to give a hefty dose of that. Cancer does not have to be life threatening – but
for some – they’re lives will be altered. There is a program called “look
good, feel good.” They have a make-up artist show the ladies how to use
make – up during chemo and radiation treatments due to hair loss and changes in
your skin. This program tries to rebuild the self-esteem for these patients by
giving them beauty products, skin care tips, and close to several hundred
dollars’ worth of cosmetics. Unfortunately too many women will be on the
receiving end of having a “designer’s scar,” due to breast cancer.

Hopefully thanks to early detection and advances in medicine we
can prevent too many “designer’s scars” from happening. No one really
understands how a serious illness can devastate your life and or your family’s
life unless it happens to them. It can impact so many things such as finances,
career, marriage, children and future decisions that one will have to make.

Thankfully I didn’t go through chemo treatments and that was a
concern because in professional sales one’s appearance is very important in
order to achieve that first impression. The important thing to remember is the
fact that there is more to a person then just there’re looks. We should naturally
try to look our best; however, there is something to be said about inner
beauty, and strength of character.