THE STORY BEHIND THE SWORD IN THE FITSURVIVOR LOGO!

A Fitsurvivor is my own definition of anyone who has survived cancer or any life threatening illness, serious accident, or challenging situation! I gladly include Wounded Warriors to the list! A Fitsurvivor could be a cancer patient, a cancer survivor, a wounded veteran, a policeman or firemen injured in the line of duty, a young professional who has a sudden illness, a seventy-five year old grandmother who survived a heart attack, or even a college student who survived a devastating illness or serious accident. You get the picture!

The name Fitsurvivor came about in the gym one day while I was cranking out some Marine style pull-ups and tricep dips! Guys would often ask me if I was some kind of competitor because its rare to see a female do this type of hardcore upper body training! I would explain that I was training with the goal competing in bodybuilding and I had attended the Arnold Expo just three weeks before my cancer surgery and did a fitness challenge so I could stay motivated! When I told them I was a breast cancer patient going through treatment – they couldn’t believe it because I was in top shape! They would often high – five me and every one of them had mentioned a family member, relative, friend, coworker, or someone they knew who was going through cancer! They said that I was not just a survivor, but a fit survivor!

I started competing in the NPC and the name stuck with me and for good reason! I quickly became known as the Fitsurvivor! When I would see my medical oncologist, some of the nurses and staff would often comment that they didn’t see many cancer patients that looked like me and wanted to know when my next competition was! We would often laugh and joke about my biometrics being so off the charts healthy that they couldn’t even compare me to what was considered normal! My blood pressure, cholesterol, BMI, and everything was beyond healthy!

THE STORY BEHIND THE SWORD!

I had won the sword in one of my NPC competitions for taking fourth place! I admit to being a little surprised while on stage the promoters were laying the swords in front of the winners! I thought what a cool thing to win! I did a fitness photo – shoot not long after the bodybuilding competition and we used the sword as a prop! Everyone thought I looked like a warrior holding the sword up the air and I decided to use this as part of my logo! The fitness photographer had used swords, axes, and various weapons as a prop during the shoot and the sword really stood out as something powerful! This gives a whole new meaning to the word – breast cancer survivor!

After drawing several different designs, I finally just removed the letter T in the logo and replaced it with the sword! The sword represents strength, endurance, resiliency, courage, power, warrior, victory and empowerment! The purpose of the sword in my logo is to give those that have survived something challenging or painful a sense of empowerment and victory over their situation!

Fitsurvivor tee shirts can now be ordered in men’s and women’s sizes by calling EmbroidMe 304-905-0036. Ask for Melinda! 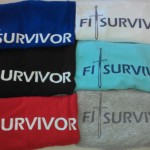 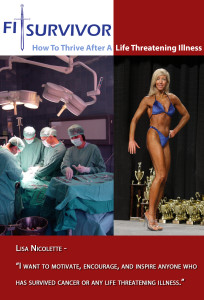